A large commercial passenger aircraft has more than 100,000 wires, with a total length of 470 km and weight of 5,700 kg. There is about 30% of additional weight in harnessing and connectors. About 30% of electrical wires are potential candidates for a wireless substitute. Wiring lacks dissimilar redundancy and has limited maintenance flexibility and access. Many bulkhead penetrations and connectors are needed between compartments, into tankage and to pass from interior to exterior. Many permanent and temporary sensors are not added because of wiring efforts and associated weight.

The business case for going wireless in the commercial aircraft industry has resulted in approval of the protected worldwide spectrum frequency band for Wireless Avionics Intra-Aircraft (on-board) Communications – sharing the RF band from 4.2 to 4.4 GHz with Radar Altimeters where safety-critical wireless may operate. Other wireless bands are already used for tire pressure monitoring and, of course, passenger services. Many technologies are evolving that support totally passive RF wireless sensors. In addition, there are optical, magnetic, and ultrasonic methods – even X-ray communications are being developed. Engineering trade-offs are necessary to understand where wires, connectors, and penetrations can be eliminated and benefits gained by adding wireless sensing and even control – the elements of which are system metrics and requirements, vehicle architectures that enable the use of wireless, and the “tool box” of alternatives to wires, connectors, and penetrations.

Beginning with the design or concept of a current aircraft or spacecraft, show how you would reduce the wires, connectors, and penetrations as close as possible to zero and add functions that the original vehicle does not have. Identify future aerospace applications as specifically as possible.

In your design, you may (but are not required to) consider:

Nuts, bolts, spent rocket stages, and broken pieces of satellites orbiting Earth are just a few of the many thousands of items known as orbital debris or space junk. Traveling at many different speeds, but up to about 17,000 miles per hour, space junk poses a threat to satellites and space stations. Figure 1 presents a screenshot of NASA’s Spacebirds web-app that depicts more than 15,500 pieces orbital debris speeding around the Earth, but some estimates put the number at over 23,000 pieces. 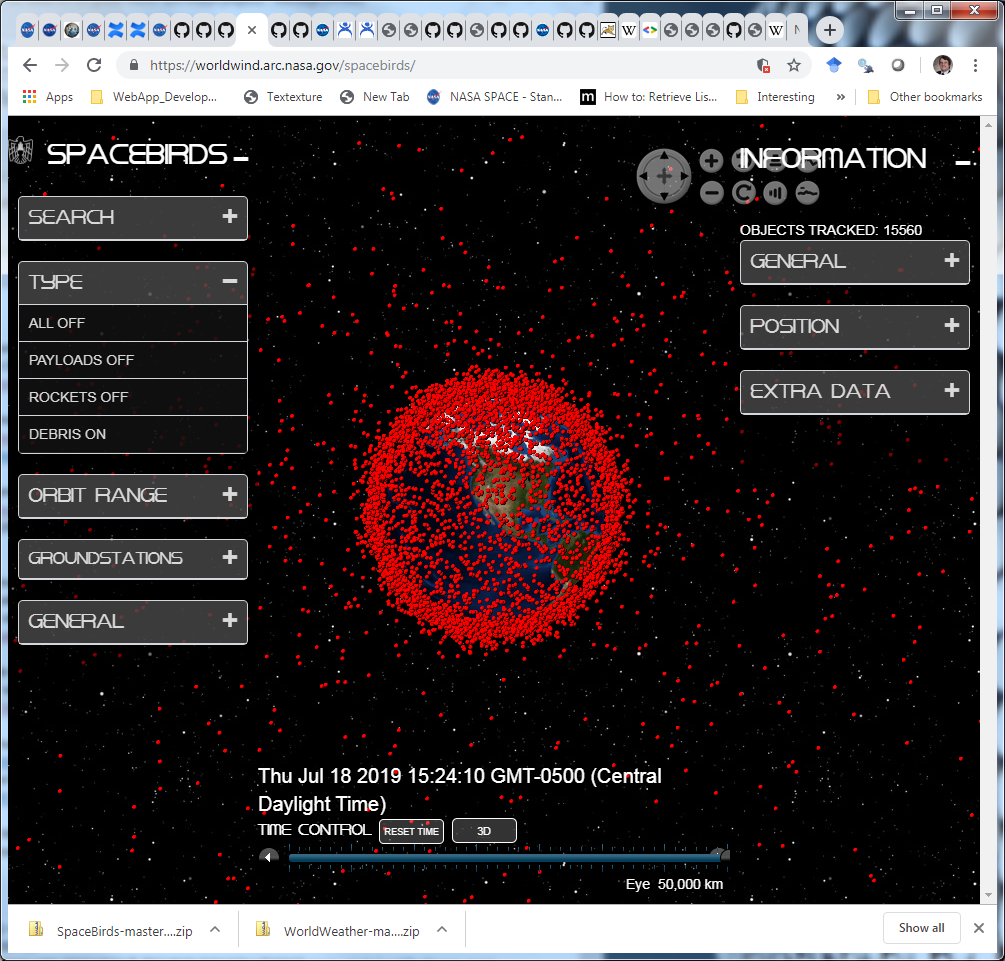 Our skies provide humanity with access to space, and as such, the space closely surrounding the Earth is a natural resource to be preserved. Your challenge is to design and/or develop a video game web-app that can educate the public about the problem of orbital debris and inspire people to think about how to capture and dispose of it — and maybe even profit from it by selling the debris as scrap!

In pursuing this challenge, consider how different points-of-view can be used in your game; your point-of-view could be first-person, third-person, or both. Here we provide examples of what types of products you could create, but you can create whatever type of solution you prefer. The sky’s the limit!

Intermediate-level teams with some knowledge of 3D computer graphics could use a JavaScript code library to produce a web-app that includes a texture-mapped sphere to represent the Earth surrounded by objects that represent orbital debris. As a keyboard-operated spacecraft model captures the objects, the objects would disappear from the screen and increase the score. Examples of intermediate level solutions could include (but are not limited to):

Advanced-level teams can build upon the Spacebirds code base and the NASA Web WorldWind 3D globe open source library to develop a video game web-app that is based upon real-world data. The resources section will provide links to the Spacebirds Github repository, Web WorldWind tutorials, and Application Programming Interface (API) documentation. Modifications to the Spacebirds code could revise the user interface to show only the space debris or a subset of the space debris in order to increase performance. Examples of advanced-level solutions could include (but are not limited to):

Find code libraries that enable the development of interactive 3D web-apps. Search for tutorials and examples that can be used as a starting point for development.

Keywords to understand how to read orbital bodies’ TLEs in terms of latitude, longitude and altitude in a web application include:

Like the Trans-Siberian Railroad spanned long distances in Asia and Europe, the Trans-Neptunian Spaceway (TNS) takes tourists and entrepreneurs to the newly accessible region of our solar system beyond Neptune. This region is ripe with opportunity! Over 80 minor planets are already known, and more are being discovered every day. Dwarf planets, plutinos, and cubewanos abound. Some are mixtures of rock and ice, others have nitrogen, methane, and exotic materials.

As the owner of TNS in 2045, your challenge is to develop marketing materials to entice visitors, and/or an app or website for your customers to book their trip! These materials should explain the destinations, characteristics, and transportation methods available.

The James Webb Space Telescope will be NASA’s next premier space science observatory and will advance the agency’s vision to “discover and expand knowledge for the benefit of humanity.” NASA named the observatory after its second administrator, James E. Webb, who helped establish the Apollo program that landed humans on the Moon.

Webb will launch from French Guiana in South America and embark on a historic mission in an orbit nearly a million miles from Earth. Webb will help scientists discover the secrets of the universe and explore our solar system and beyond, expanding upon the scientific discoveries of NASA’s other space observatories (such as Hubble, Spitzer, and Chandra).

Webb is designed to look far back in time—over 13.5 billion years—to study an extremely wide range of astrophysical phenomena. Webb will explore all phases of our cosmic history. By observing the infrared light from the first luminous objects that formed in the early universe, Webb will be able to see the evolution of galaxies and the birth of stellar systems. Webb will study objects in our solar system and nearby planets orbiting other stars, known as exoplanets.

Your challenge is to create an animated cartoon/virtual reality environment or game using visuals of Webb’s hardware and hardware deployment timeline. You can make it competitive or collaborative, from single-player to multiplayer. You can focus on the science, data, or the aesthetics. Consider incorporating educational features, potentially highlighting its scientific instruments, deployment capabilities, and more using NASA’s data and publications on Webb’s engineering innovations. The story of the product is up to you!